Do you have a SIDE GIG? 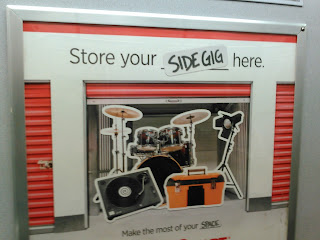 I saw this subway ad just this past week and decided to take a quick photo of it. (I do this now and then, and it's usually awkward when someone's sitting in front of the ad.) My wife and I keep a storage unit just one local subway stop away from our place in Brooklyn. I was just there today to get our air conditioner as the hot summer months are again upon us. I'm sure people along my route on 4th Avenue notice me carefully rolling the A/C one way when the temperatures begin to rise in the summer and the other way in the fall when temperatures start to drop. We also visit our storage unit before and after traveling to pick up and drop off luggage and bags and stuff.


Is keeping a storage unit common where you live? It's actually quite ubiquitous here in NYC as apartment sizes are often short on space. I would venture to guess though that most of us who keep storage units really need to get over our hoarding tendencies and get rid of stuff that we really don't need. Some people, however, really do need to store stuff. If you have a side gig, as this ad suggests, and need a place to store some equipment, then a storage place is a great option.


The word "gig" is usually used to talk about work that is not permanent. Actors, musicians, freelancers of all kinds use the word "gig" a lot. When a band is playing at your favorite bar, that's their gig. However, the word "gig" can also be used to refer to a permanent position when you're referring to your job in an informal manner. A doctor, for example, might say to his friends, "I love being a doctor; it's a nice gig." However, if the doctor were making a speech at a convention, he would probably say, "I love being a doctor; it's a challenging but fulfilling profession." Some doctor's though actually do act or belong to a band on the side! If they live in New York City, there's a good chance they are keeping their equipment for their side gigs at a storage place.

So, do you or anyone you know have a side gig?

I hope you make the small guide site's blog of English lessons your go-to site for learning and practicing English online. In fact, I hope you sign up for email delivery of my lessons. They are mostly on vocabulary, idioms, grammar, and pronunciation. You can sign up by entering your email address just above and to the right.
This blog is supposed to go hand-in-hand with the small guide site, where you will find more lessons, exercises, and tips to help you learn and master English. I started both sites in 2009, so there is a wide variety of lessons. If you are looking for a specific vocabulary or grammar point, you can use the search feature just above. If I haven't written about it yet, you can let me know here, and I will get on it as soon as I can.
Be our fan on Facebook; follow me on Twitter, Instagram, & Google +!
Thank you for visiting! Take care, and I'll see you around!
Joe, the small guide to improving your English!